When ‘postman of the yore’ came knocking 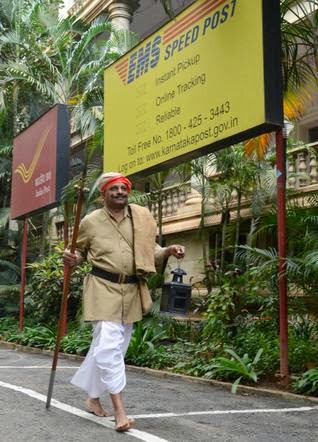 On a dull Saturday morning, a few residents of Madhavanagar were pleasantly surprised to have their letters delivered by a barefooted postman dressed in ‘kachche panche’ (dhoti) and ‘petha’ (head gear), who also held a spear with jingling bells tied to it. In his left hand, he carried a lantern.
The postman, A.S. Chandrashekhar, also a theatre artiste who goes by the name GPO Chandru, explained to the bemused citizens the significance behind his attire.

“When postal services were introduced in October 1854 in India, this was the uniform of postmen. With no transport facility then, the postmen would cover long distances on foot. In some places there was a relay system, where postmen would deliver letters to their colleagues to reach the final destination,” he said.
With India Post, Karnataka, celebrating Postal Week till October 15, Dinesh Khare, Deputy Chief Postmaster, Bangalore GPO, toldThe Hindu that the objective of the exercise was to showcase the journey that the Postal Department had undertaken thus far. “The postmen used to carry a spear with jingles attached to it. The spear was for protection and the bells were used to inform others of their arrival,” he said.

Later, Mr. Chandrashekhar interacted with several schoolchildren and explained why the postmen of yore dressed that way.
Source :  http://www.thehindu.com/news/national/karnataka/when-postman-of-the-yore-came-knocking/article6492126.ece
Posted by DEBABRATA MOHANTY at 20:04