http://www.patrika.com
Posted by DEBABRATA MOHANTY at 19:44 No comments:

Posted by DEBABRATA MOHANTY at 06:12 No comments:

New Delhi/Chennai, Jun 29 (PTI) The Confederation of Central Government Employees today rejected the pay hike announced by the government and threatened to go on a strike next week, a decision which got support from the central trade unions.The Confederation said the pay hike approved by the Cabinet on the 7th Central Pay Commission's recommendations is "not acceptable".RSS affiliate Bharatiya Mazdoor Sangh (BMS) and other trade unions also rejected the hike, saying this is the lowest increase in the past 17 years that would increase disparity between the minimum and maximum pay.Central trade unions have also sided with government employees and have given a call to hold nationwide demonstrations against the pay hike."In the prevailing economic conditions, the proposed hike as per the Pay Commission is inadequate. It is not acceptable to us," M Duraipandian, General Secretary, Confederation of Central Government Employees and Workers, Tamil Nadu, said.He added the Confederation will be forced to advance the indefinite strike call to July 4 instead of July 11, if the government does not heed to its demand of revising the hike.Earlier in the day, its members staged a demonstration at Rajaji Bhavan in Chennai, home to several state government's offices.All India Trade Union Congress Secretary D L Sachdev said: "It is the lowest increase in last 17 years. Central trade unions will support the strike call given by central government employees." While, BMS said it will organise country-wide protests on July 8 against the decision, adding the government has "disappointed" the employees and it may lead to industrial unrest."The formula should be 3.42 instead of 2.57 as approved by the government. Similarly the annual increment should be 5 per cent instead of 3 per cent given. The disparity between the minimum and maximum pay has also been increased," BMS General Secretary Virjesh Upadhyay said.In a statement, he said the Sangh will organise protests across the country in all districts on July 8 and will discuss on the alternative of going on a strike at its national executive in August.BMS also demanded for a uniform minimum pay of Rs 18,000 per month to all the workers including the private sector.
Posted by DEBABRATA MOHANTY at 06:11 No comments: 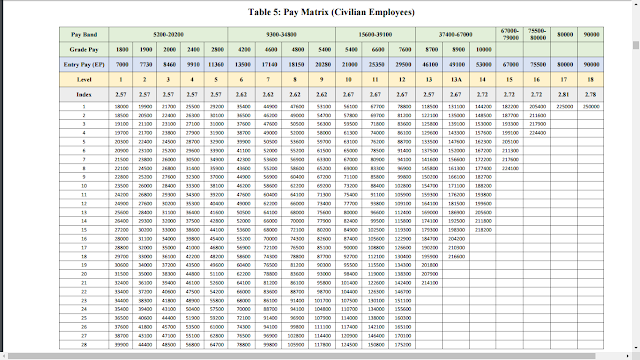 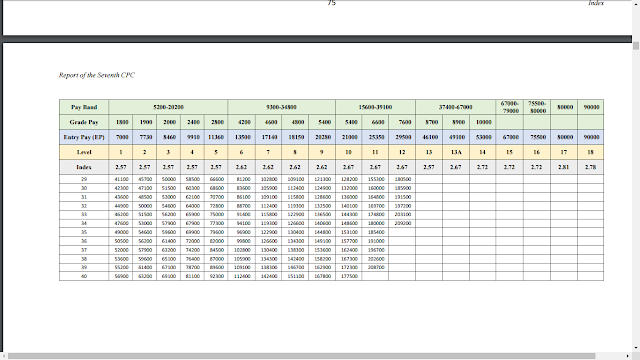 For lazy people like me you can directly use the calculator. I don't know who created it but thanks to them.

Calculate your new salary and comment your old and new salaries below.
Posted by DEBABRATA MOHANTY at 06:08 No comments:

Email ThisBlogThis!Share to TwitterShare to FacebookShare to Pinterest
GO AHEAD WITH INTENSIVE PREPERATIONS FOR 11TH JULY 2016 INDEFINITE STRIKE - NJCA

To,
All Constituents of NJCA,

As all of you are aware that the Union Cabinet has accepted the report of the VII CPC today.

It has been noticed that there is no improvement in Minimum Wage and Multiplying Factor as well, which was our hard pressed demand. Instead, wages, as recommended by the VII CPC have been accepted as it is, which is highly disappointing.

Only two committees have been formed, one to take care of the allowances and another for National Pension Scheme, which will submit their reports within four months time.

It is quite unfortunate that, our demand for improvement in the report of the VII CPC has not been considered by the government.

Therefore, it would be quite appropriate that, we should go ahead with our preparations for “Indefinite Strike”, slated to be commended from 06:00 hrs. on 11th July, 2016.

You are also advised to intensify the mass mobilization and strong protests on all the offices and establishments be organized tomorrow, i.e. on 30.06.2016.

Email ThisBlogThis!Share to TwitterShare to FacebookShare to Pinterest
AIRF CALL TO GO FOR MASS MOBILIZATION AND PREPARE FOR INDEFINITE STRIKE FROM 11th JULY 2016

Posted by DEBABRATA MOHANTY at 06:02 No comments:

The Union Cabinet chaired by the Prime Minister Shri Narendra Modi has approved the implementation of the recommendations of 7th Central Pay Commission (CPC) on pay and pensionary benefits.   It will come into effect from 01.01.2016.

The Cabinet has also decided that arrears of pay and pensionary benefits will be paid during the current financial year (2016-17) itself, unlike in the past when parts of arrears were paid in the next financial year.
The recommendations will benefit over 1 crore employees. This includes over 47 lakh central government employees and 53 lakh pensioners, of which 14 lakh employees and 18 lakh pensioners are from the defence forces.

1.              The present system of Pay Bands and Grade Pay has been dispensed with and a new Pay Matrix as recommended by the Commission has been approved. The status of the employee, hitherto determined by grade pay, will now be determined by the level in the Pay Matrix. Separate Pay Matrices have been drawn up for Civilians, Defence Personnel and for Military Nursing Service. The principle and rationale behind these matrices are the same.

2.            All existing levels have been subsumed in the new structure; no new levels have been introduced nor has any level been dispensed with. Index of Rationalisation has been approved for arriving at minimum pay in each Level of the Pay Matrix depending upon the increasing role, responsibility and accountability at each step in the hierarchy.

5.            Rate of increment has been retained at 3 %. This will benefit the employees in future on account of higher basic pay as the annual increments that they earn in future will be 2.57 times than at present.

6.            The Cabinet approved further improvements in the Defence Pay Matrix by enhancing Index of Rationalisation for Level 13A (Brigadier) and providing for additional stages in Level 12A (Lieutenant Colonel), 13 (Colonel) and 13A (Brigadier) in order to bring parity with Combined Armed Police Forces (CAPF) counterparts at the maximum of the respective Levels.

7.            Some other decisions impacting the employees including Defence & Combined Armed Police Forces (CAPF) personnel include :

8.            The Cabinet also approved the recommendation of the Commission to enhance the ceiling of House Building Advance from Rs.  7.50 lakh to 25 lakh. In order to ensure that no hardship is caused to employees, four interest free advances namely Advances for Medical Treatment, TA on tour/transfer, TA for family of deceased employees and LTC have been retained. All other interest free advances have been abolished.

9.            The Cabinet also decided not to accept the steep hike in monthly contribution towards Central Government Employees Group Insurance Scheme (CGEGIS) recommended by the Commission. The existing rates of monthly contribution will continue. This will increase the take home salary of employees at lower levels by Rs. 1470. However, considering the need for social security of employees, the Cabinet has asked Ministry of Finance to work out a customized group insurance scheme for Central Government Employees with low premium and high risk cover.

10.        The general recommendations of the Commission on pension and related benefits have been approved by the Cabinet. Both the options recommended by the Commission as regards pension revision have been accepted subject to feasibility of their implementation. Revision of pension using the second option based on fitment factor of 2.57 shall be implemented immediately. A Committee is being constituted to address the implementation issues anticipated in the first formulation. The first formulation may be made applicable if its implementation is found feasible after examination by proposed Committee which is to submit its Report within 4 months.

11.        The Commission examined a total of 196 existing Allowances and, by way of rationalization, recommended abolition of 51 Allowances and subsuming of 37 Allowances. Given the significant changes in the existing provisions for Allowances which may have wide ranging implications, the Cabinet decided to constitute a Committee headed by Finance Secretary for further examination of the recommendations of 7th CPC on Allowances.  The Committee will complete its work in a time bound manner and submit its reports within a period of 4 months. Till a final decision, all existing Allowances will continue to be paid at the existing rates.

12.        The Cabinet also decided to constitute two separate Committees (i) to suggest measures for streamlining the implementation of National Pension System (NPS) and (ii) to look into anomalies likely to arise out of implementation of the Commission’s Report.

13.        Apart from the pay, pension and other recommendations approved by the Cabinet, it was decided that the concerned Ministries may examine the issues that are administrative in nature, individual post/ cadre specific and issues in which the Commission has not been able to arrive at a consensus.

Posted by DEBABRATA MOHANTY at 06:01 No comments:

Email ThisBlogThis!Share to TwitterShare to FacebookShare to Pinterest
PUBLIC AUTHORITIES SHOULD USE INDIA POST SERVICES NOT PRIVATE COURIER SERVICE

It is observed that several government-departments, public-authorities and public-sector-undertakings (PSUs) use private courier service rather than postal services.
With premium postal-services like Speed Post now available at most post offices and destinations, it should be made compulsory for all bodies under central and state governments for compulsorily using only normal postal-services. Registered Post should be used at destinations not covered by premium Speed Post service. Postal Department should take up the matter with Department of Public Enterprises and others concerned.
In Focus Public sector services should be utilised by all public authorities as far as possible to encourage public sector and to prevent the public money from going to services under private sector.
Postal department can also provide special privilege to Public Sector Undertakings (PSUs) by introducing sponsored postal stamps against some minimum purchase of postal stamps where such sponsored postal stamps can carry design advertisements from these PSUs but only after being approved by the postal department.
Such sponsored postal stamps can have some advertisement cost per stamp like in case of inland-letter cards and post cards. This idea will give increased revenue earning for postal department, and an advertisement-field for PSUs.
However Speed Post tariffs will have to be rationalized and revised to be uniform for local and non-local services with equal tariff-rise for every additional 50 gms rise in slab-weight to compete charges of private courier services.
Posted by DEBABRATA MOHANTY at 06:00 No comments:

Email ThisBlogThis!Share to TwitterShare to FacebookShare to Pinterest
SELECTION PROCESS FOR ENGAGEMENT TO ALL APPROVED CATEGORIES OF GDS POSTS - REVIEW THERE OF 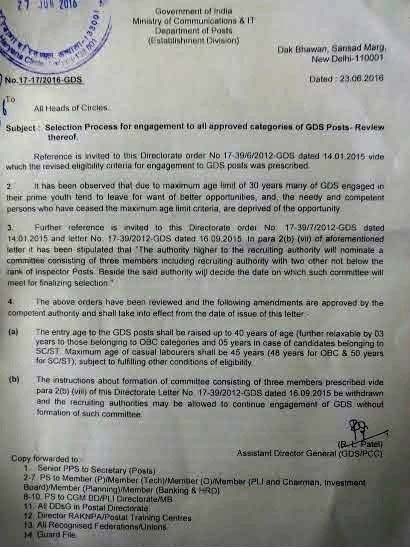 Copy of the above letter :

To
All Heads of Circles

Reference is invited to this Directorate order No.17-39/6/2012-GDS dated 14-01-2015 vide which the revised eligibility criteria for engagement to GDS posts was prescribed.

2.            It has been observed that due to maximum age limit of 30 years many of GDS engaged in their prime youth tend to leave for want of better opportunities and the needy and competent persons who have ceased the maximum age limit criteria are deprived of the opportunity.

3.            Further reference is invited to this Directorate order No.17-39/7/2012-GDS dated 14-01-2015 and letter No.17-39/2012-GDS dated 16-09-2015 in para 2(b) (vii) of aforementioned letter it has been stipulated that “the authority higher to the recruiting authority will nominate a committee constituting of three members including recruiting authority with two others not below the rank of Inspector Posts. Beside the said authority will decide the date on which such committee will meet for finalizing selection”

4.            The above orders have been reviewed and the following amendments are approved by the competent authority and shall take into effect from the date of issue of this letter.

(a)    The entry age to the GDS posts shall be raised up to 40 years of age (further relaxable by 03 years to those belonging to OBC categories and 05 years in case of candidates belonging to SC/ST. Maximum age of Casual Labourers shall be 45 years (48 years for OBC & 50 years for SC/ST) subject to fulfilling other conditions of eligibility.

(b)   The instructions about formation of committee consisting of three members prescribed vide para 2 (b) (viii) of this Directorate letter No.17-39/2012-GDS dated 16-09-2015 be withdrawn and the recruiting authorities may be allowed to continue engagement of GDS without formation of such committee.