MEETING OF THE NJCA


CLICK HERE TO VIEW
Posted by DEBABRATA MOHANTY at 03:48 No comments:

Subject: Recommendations of the Seventh Pay Commission – Comments – regarding

Please find attached the extracts of para-9.2.19 on the above Report on ‘Gazetted and Restricted Holidays. The Commission has expressed opinion that the present system is working well and has recommended status-quo.

2. It is requested that your comments in this matter may please be provided to this Department, preferably, by 05.02.2016, so that a view can be taken.

Yours faithfully
sd/-
(G.Srinivasan)
Deputy Secretary to Government of India

Click to view the recommendations on ‘Gazetted and Restricted Holidays’

Posted by DEBABRATA MOHANTY at 03:36 No comments:

To mark the completion of two years of statutory status of PFRDA, National Pension System (NPS) Service Week will be observed from 1st February to 6th February, 2016 dedicated to service-orientation towards the subscribers and building awareness and improved information dissemination.

PFRDA would be completing 2 years of its statutory status on February 1, 2016 as the ACT conferring the statutory status to PFRDA was notified on 1st Feb 2014. To mark this occasion, PFRDA in collaboration with all its intermediaries in the National Pension System (NPS), namely the Central and the State Governments nodal offices, POPs, Aggregators, Central Recordkeeping Agency, NPS Trust etc. is observing NPS Service Week from February 1- 6, 2016. This week-long campaign is being dedicated to service-orientation towards the subscribers and aimed at awareness building and improved information dissemination.

On this occasion, besides sharing of information on the range of functionalities and services now available under the NPS, the subscriber community shall be apprised about the need for constant updation of data/information to enable the system to operate at its optimum service level, so that the intended benefits now available under the new functionalities, can reach all the employees/subscribers under NPS. Besides, the subscribers will also be able to make best use of this opportunity and facilities available therein.

Following are some of the activities which may be undertaken by the nodal officers in the proposed NPS Service Week:

• Creating awareness about the NPS – Salient features of the scheme, the process of joining it, special efforts to reduce subscribers’ grievances, etc.

• Printing and distribution of the subscriber brochure for Govt. Subscribers.

• Advising subscribers regarding benefits associated with PRAN being IRA compliant and updation of contact details.

PFRDA has also advised the CRA (NSDL) in this matter for actively assisting the Nodal Offices, POPs and aggregators in this campaign and for providing necessary guidance and further information to the employee-subscribers. This exercise is likely to help around 95 lakhs subscribers and would be available through more than 2 lakhs of points of interface comprising of Government offices , banks, non- bank Points of Presence and aggregators.

On its part, the Pension Fund Regulatory and Development Authority is organizing the 2nd Pension Conclave in Delhi on 4th February 2016 with the theme, “Towards Universal Pension: Coverage, Adequacy and Sustainability”. All the stake holders – POPs, CRA, TB, PFs, Custodian, Nodal Officers etc are expected to participate and share their experiences. PFRDA proposes to use this occasion to acknowledge/ award the best performing banks and Post Offices in mobilization and registration of subscribers under the Atal Pension Yojana up to 31st December 2015 and institute awards for best performing POPs under the Voluntary segment of the National Pension System.
Posted by DEBABRATA MOHANTY at 03:31 No comments:

Implementation of the recommendations of the 7th CPC – Meeting of Nodal officers of various Departments will be held on 2.2.2016

Subject : Meeting of Nodal officers of various Departments – implementation of the recommendations of the 7th CPC – Issues on way ahead.

In order to process the recommendations of the 7th Central Pay Commission, the Cabinet has approved setting up of an Empowered Committee of Secretaries chaired by the Cabinet Secretary. Accordingly, the ECOS has been set up as per this Ministry’s OM No.1-4/2015/EIII-A dt. 27.1.2016 (copy placed on the website of this Ministry, viz, www.finmin.nic.in).

2. As provided in the said OM dt. 27.1.2016, the Implementation Cell created in this Ministry shall work as the Secretariat for the ECOS.

3. This Ministry has already requested all the Ministries/Departments vide DO letter No.1-4/2015/EIII.A dt. 21.11.2015 from JS(Pers) addressed to all the Secretaries to nominate a nodal officer at the level of a Joint Secretary to interact with the Implementation Cell during the curse of processing of the recommendations of the 7th CPC.

5. As this is the first meeting of the Nodal Officers to formulate the action points on the way ahead on processing of the recommendations of the 7th CPC, it is requested that the concerned nodal officers may kindly make it convenient to attend the meeting.

To
All the nodal officers of Ministries/Departments, as per list attached.

Click to view the order
Posted by DEBABRATA MOHANTY at 03:31 No comments:

GOVERNMENT OF INDIA
MINISTRY OF COMMUNICATIONS AND INFORMATION TECHNOLOGY
LOK SABHA
UNSTARRED QUESTION NO: 2965
ANSWERED ON: 16.12.2015
Revenue and Market Share of India Post
DEVENDRA (ALIAS) BHOLE SINGH SINGH
JAYADEV GALLA
KUNWAR SARVESH KUMAR
ASADUDDIN OWAISI
Will the Minister of
COMMUNICATIONS AND INFORMATION TECHNOLOGY be pleased to state:-
(a) whether the revenue and market share of India post has been declining;
(b) if so, the details of revenue generated separately from different segments such as parcel and speed and post expenditure incurred along with market share of India post during the last three years and the current year;
(c) whether Government proposes to introduce some scheme on Public Private Partnership (PPP) model and if so, the details thereof;
(d) whether India post is paying special focus on parcel segment and plan to establish 48 new set of parcel centres and if so, the details thereof; and
(e) the other measures taken by the Government to improve the postal delivery system of India post and increasing its revenue?
ANSWER
THE MINISTER OF COMMUNICATIONS AND INFORMATION TECHNOLOGY
(SHRI RAVI SHANKAR PRASAD)
(a) No Madam, the Postal Department has been continuously earning higher revenue every year and its share of revenue has been increasing year after year.
(b) Not applicable in view of reply at (a) above.
(c) No Madam.
(d) & (e) Yes Madam, 48 dedicated Parcel Centres have been established in 2014-15 and another 9 have been established this year. Department is laying special emphasis on the Parcel segment through upgradation of Parcel infrastructure, improving the delivery system and revamping parcel transmission modes and routes. Some measures taken to improve quality of parcel service are as follows:-
i. The Parcel transmission & delivery network is being continuously reviewed and monitored for checking and improving efficiencies and better service quality.
ii. The Department of Posts offers end-to-end track & trace for Speed Post, Registered and other parcels through its website (www.indiapost.gov.in). This track and trace facility is available to retail as well as bulk customers for tracking the consignments on a real time basis.
iii. Department is developing its Road Transport Network for fast and secure transmission of parcels on identified routes. 11 major routes have been started this year.
iv. Department has introduced Mechanized Nodal Delivery of parcels from identified delivery centres in certain cities.
v. GPS devices have been installed in mail vans and other security measures improved.
vi. As a result of the efforts towards improving the quality of its services, the revenues of the Department have been consistently growing in the last several years.
Trend of Revenue Growth (Rs. In crore)

(vii) Parcel revenue registered 37% growth in 2014-15. 117% growth in parcel revenue till 31st October 2015 in the current financial year.
(viii) Rs. 970 Crore Cash On Delivery collection done by Department of Posts till November 2015.
(ix) Speed Post revenue growth in the current financial year is more than 16%. CAG report laid in Parliament on 8th May 2015 highlighted that Speed Post is far better than private couriers, in terms of reach, assured delivery and delivery time.
Posted by DEBABRATA MOHANTY at 19:26 No comments:

GOVERNMENT OF INDIA
MINISTRY OF COMMUNICATIONS AND INFORMATION TECHNOLOGY
LOK SABHA UNSTARRED QUESTION NO: 4022
ANSWERED ON: 23.12.2015
Streamlining Postal System SANJAY(KAKA) RAMCHANDRA PATIL Will the Minister of
COMMUNICATIONS AND INFORMATION TECHNOLOGY be pleased to state:-
(a) the budget allocations made for the Department of Posts during the last three years and the current year along with the target fixed and achieved during the said periods and the shortfall, if any, in achieving the targets;
(b) whether the Government also proposes to introduce new post office bill and also bifurcate the postal Department with a view to streamline the postal system and compete with the challenges posed by courier companies; and
(c) if so, the details thereof and the steps taken by the Government in this regard?
ANSWER
THE MINISTER OF COMMUNICATIONS AND INFORMATION TECHNOLOGY
(SHRI RAVI SHANKAR PRASAD)
(a) Details of budget allocations and achievements for Department of Posts under Plan, for which targets were fixed, for financial years 2012-13, 2013-14, 2014-15 and the current financial year 2015-16, are furnished as under:-
Financial Year
Budget allocation (in Rs. Crore)* Actual Expenditure booked during the financial year** % Achievement
2012-13 222.40 185.21 83.28
2013-14 430.00 393.80 91.58
2014-15 300.00 306.71 102.24
2015-16 468.61 174.86 Under implementation
*Final Grant for 2012-13, 2013-14 and 2014-15 and BE for 2015-16
**Booking up to 31st March for 2012-13, 2013-14 and 2014-15 and up to 30th November, for 2015-16 Amount in Crore)
(b) No, Madam. There is no proposal for introduction of new post office bill or bifurcation of the postal Department.
(c) Not applicable in view of (b) above.
Posted by DEBABRATA MOHANTY at 19:24 No comments: 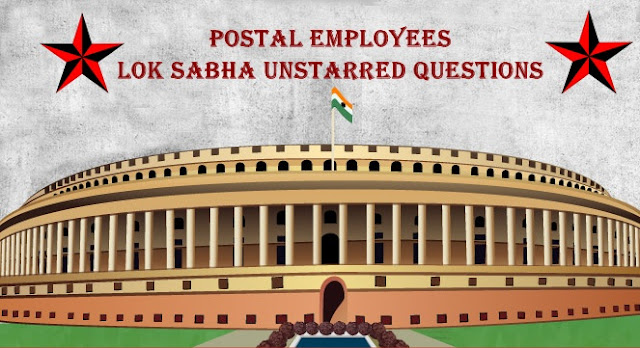 To view, please CLICK HERE.
Posted by DEBABRATA MOHANTY at 19:23 No comments:

Posted by DEBABRATA MOHANTY at 19:22 No comments: