The Department of Posts has redesigned the uniform for Postmen (both male and female) and MTS cadre in consultation with National Institute of Fashion Technology, Delhi (NIFT).

The uniform has been redesigned keeping in view the functionality, comfort and durability. The uniform will provide a strong brand identity of the Department of Posts as it provides for easy identification of postmen staff.

The Department enjoys credibility and respect through the field operatives that is the postmen. He is the face of the Department as he delivers letters and parcels to every door. Therefore, it is important that the uniform he wears, which identifies him with the Department should be such that he stands out. Khadi being indigenous to our culture and comfortable in all climatic zones of the country was found suitable for the postmen.

As per the recommendation of 7th CPC, the Government has decided to provide Rs. 5,000/- as dress allowance per year. Khadi and Village Industries Commission (KVIC) under the Ministry of Micro, Small & Medium Enterprises has agreed to provide dresses for the postmen from its outlets in each district of the country. The Postmen can purchase dresses from outlets of KVIC from the dress allowances provided to them. 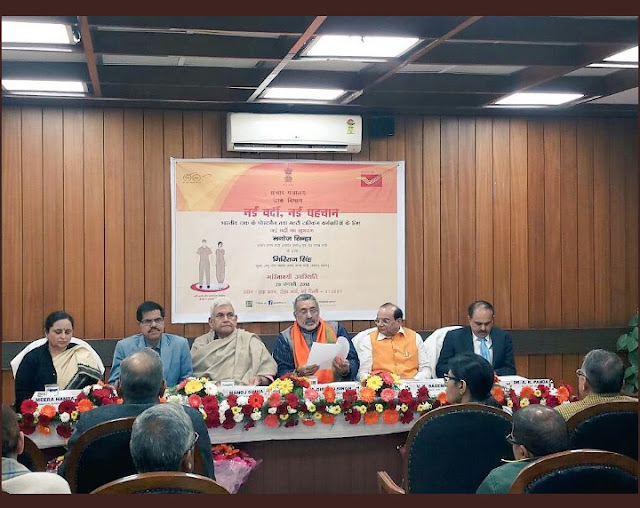 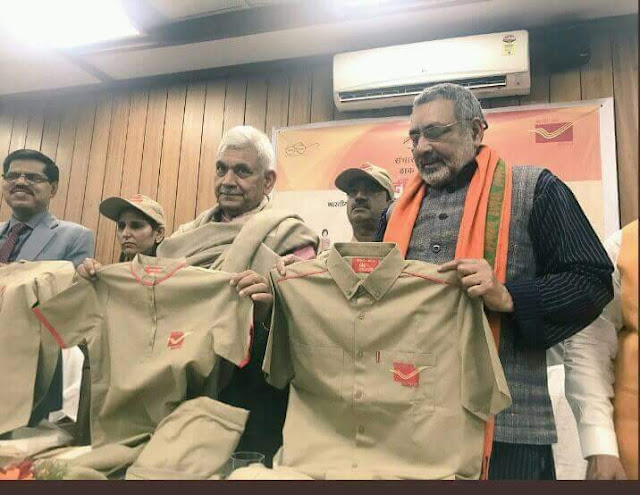 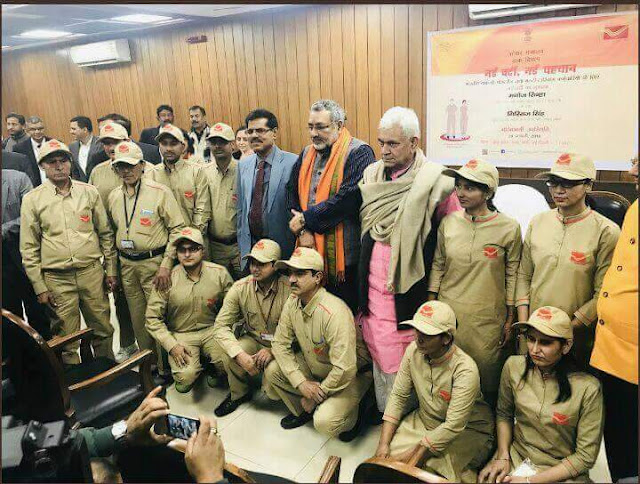 Posted by DEBABRATA MOHANTY at 09:09 No comments: 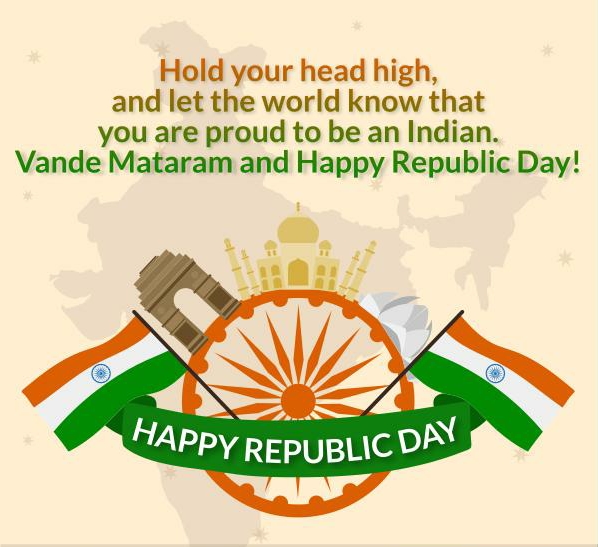 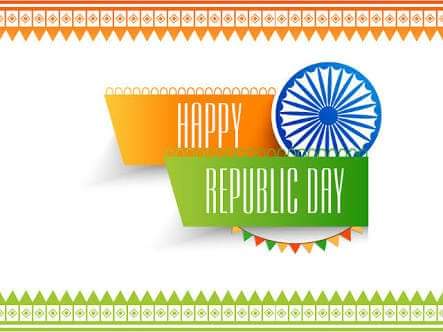 Posted by DEBABRATA MOHANTY at 17:42 No comments: 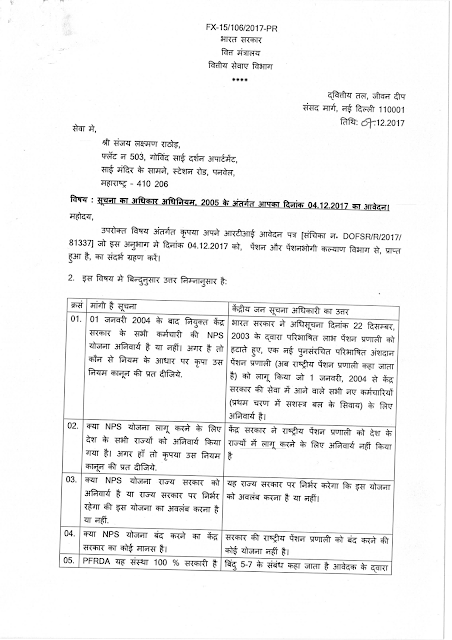 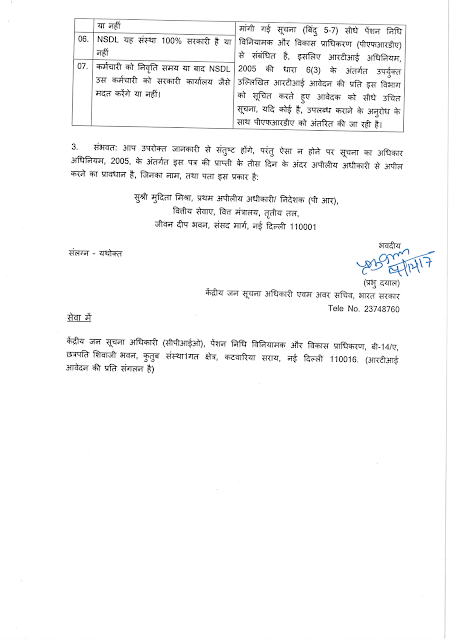 Posted by DEBABRATA MOHANTY at 06:14 No comments:

All Members/Leaders of NFPE Unions are requested to participate in Dharna in maximum number as per schedule enclosed herewith for settlement of 15 Points Charter of Demands. 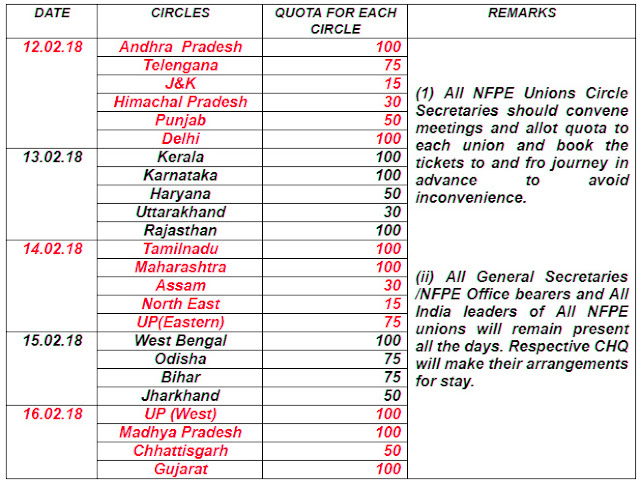 Source : NFPE
Posted by DEBABRATA MOHANTY at 06:09 No comments: 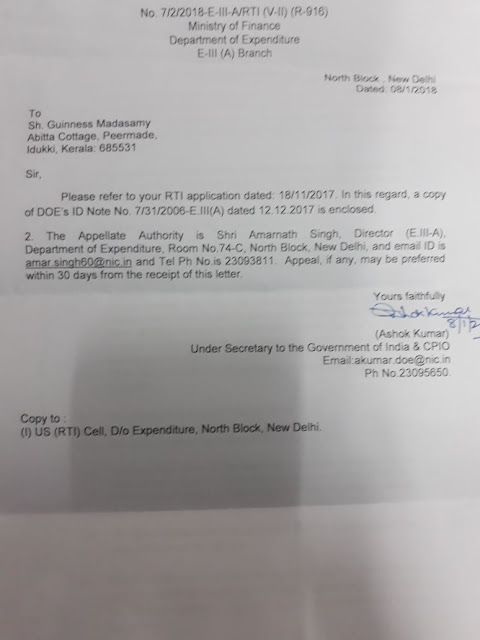 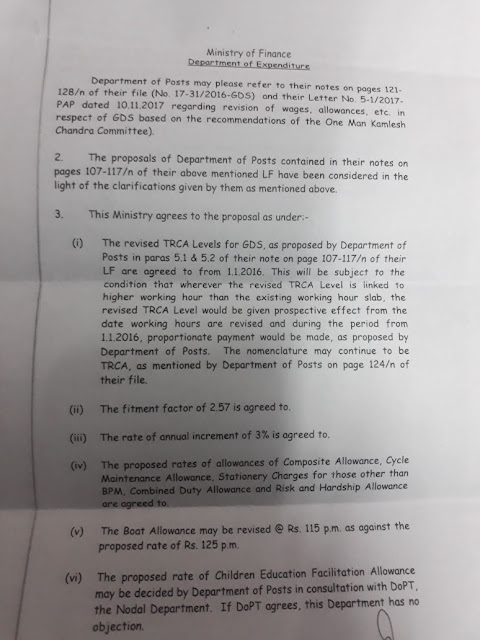 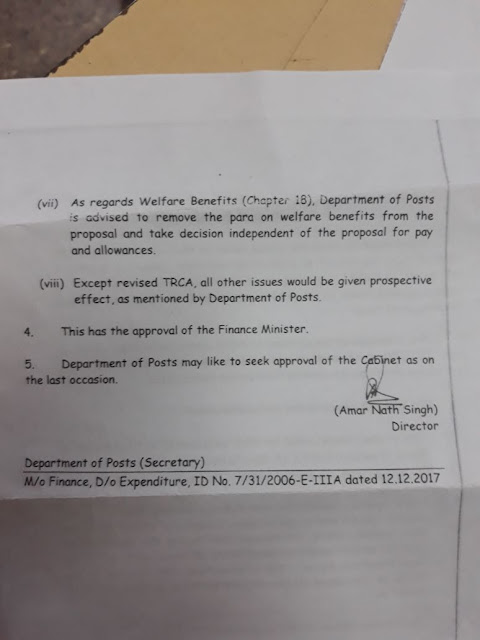 Posted by DEBABRATA MOHANTY at 08:06 No comments: 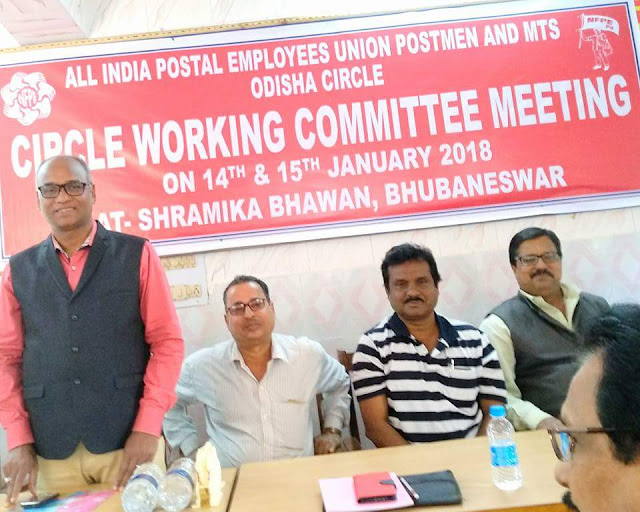 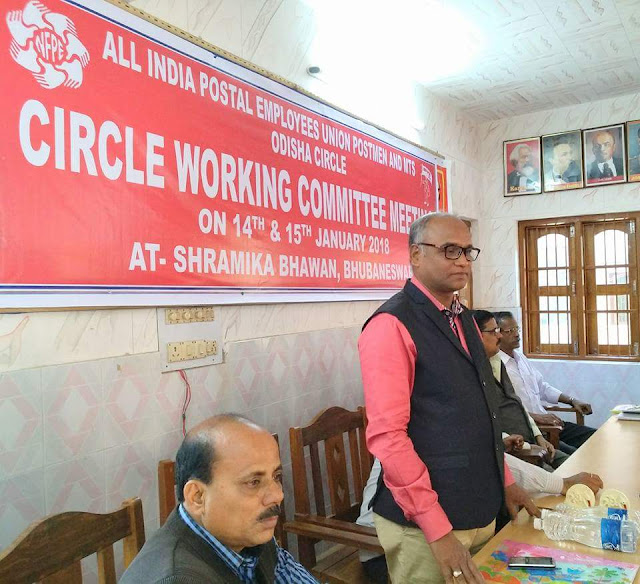 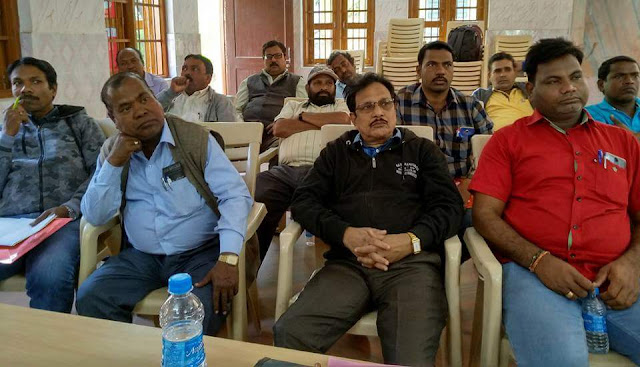 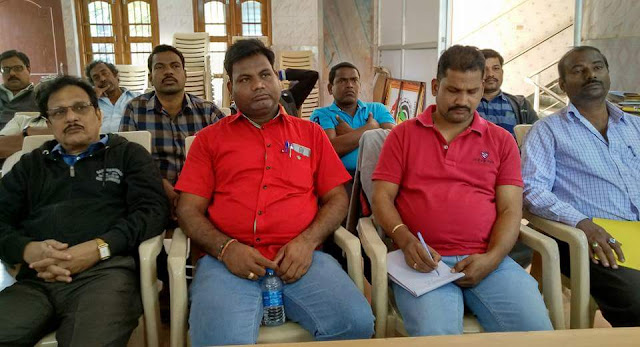 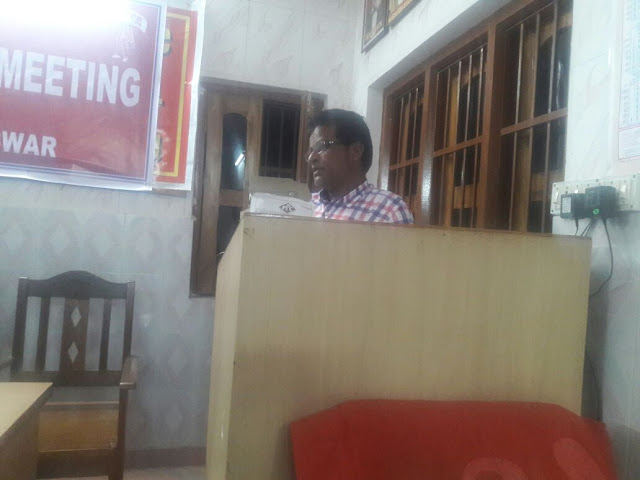 Posted by DEBABRATA MOHANTY at 08:04 No comments: 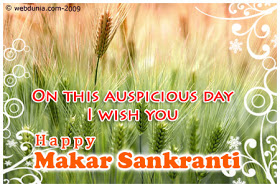 Posted by DEBABRATA MOHANTY at 10:35 No comments:

QUOTA FOR EACH CIRCLE


(1) All NFPE Unions Circle Secretaries should convene meetings and allot quota to each union and book the tickets to and fro journey in advance to avoid inconvenience.

(ii) All General Secretaries /NFPE Office bearers and All India leaders of All NFPE unions will remain present all the days. Respective CHQ will make their arrangements for stay.


Stay arrangements have been made by respective CHQs.

Secretary General
Posted by DEBABRATA MOHANTY at 02:36 No comments:


Minister of State (IC) for Communications & Railways, Shri Manoj Sinha, in a written reply to a question on GDS Kamlesh Chandra Committee Report, in Lok Sabha on 27.12.2017 informed that a One Man Committee has been constituted to look into the salary structure, other service matters and problems of Gramin Dak Sevaks under the Chairmanship of Shri Kamlesh Chandra.

The Committee has submitted its report to the Government. The salient features are given in the Annexure.


The old system of payment of Time Related Continuity Allowance (TRCA) is dispensed with and replaced with a new wage payment system. Under the new wage payment system, 11 TRCA slabs are subsumed into 3 Wage Scales with two Levels each for BPMs and for other than BPMs. One wage scale would be common for both the categories of GDSs.

The minimum working hours of GDS Post Offices and GDSs are increased to 4 hours from 3 hours.

The new working hours for GDS Post Offices will be 4 hours and 5 hours only.

The Point System for assessment of workload of BPMs has been abolished.

The new wage payment system is linked to revenue generation of GDS Post Offices. Under the new system, there will be no increase in wages of BPMs from Level -1 to Level -2 on the basis of workload but the same will be increased based on achievement of prescribed revenue norms which is fixed at 100% for normal areas and 50% for special areas.

The rate of annual increase is recommended as 3%.

A Composite Allowance comprising of support for hiring accommodation for GDS Post Offices as well as mandatory residence, office maintenance, mobile and electricity usage charges etc. has been introduced for the first time.

Children Education Allowance @Rs. 6000/- per child per annum has been introduced for GDSs.

Risk & Hardship Allowance @Rs. 500/- per month for GDS working in the special areas has also been introduced.

A Financial up-gradation has been introduced at 12 years, 24 years and 36 years of services in form of two advance additional annual increases.

The contribution of Department in Circle Welfare Fund (CWF) has been increased from Rs. 100/ per annum to Rs. 300/ per annum.

The scope of CWF is extended to cover immediate family members such as spouse; daughters, sons and dependent daughters in law in the scheme.

The Committee also recommended 10% hike in the prescribed limits of financial grants and assistances in the Circle Welfare Funds.

The Committee has recommended addition of Rs. 10,000/ for purchase of Tablet / Mobile from the Circle Welfare in the head “Financial Assistance of Fund by way of loans with lower rate of interest (5%)”.

Provision of 26 weeks of Maternity Leave for women GDS has been recommended.

The wages for the entire period of Maternity Leave is recommended to be paid from salary head from where wages of GDSs are paid.

The Committee has also recommended one week of paternity leave.

Leave accumulation and encashment facility up to 180 days has been introduced.

Online system of engagement has been recommended.

Alternate livelihood condition for engagement of GDSs has been relaxed.

Voluntary Discharge scheme has been recommended.

The Discharge age has been retained at 65 years.

The Limited Transfer Facility has been relaxed from 1 time to 3 times for male GDSs. There will be no restriction on number of chances for transfer of women GDSs. The powers for transfer has been delegated to the concerned Divisional head.

The ex-gratia payment during put off period should be revised to 35% from 25% of the wage and DA drawn immediately before put off.

The Committee has recommended preferring transfer before put off duty.


Source: loksabha.nic.in
Posted by DEBABRATA MOHANTY at 22:20 No comments: