(Most Urgent and Important)


All General Secretaries /NFPE Office bearers / Circle
Secretaries / All India Office bearers of All NFPE Unions are requested to make their programme of stay for 5 days from Dated 12-2-2018 to 16-02-18 to participate in 5 days Dharna at Delhi.


All General Secretaries/CHQs are requested to make arrangement for stay of their respective leaders.


All Circle Secretaries are requested to select the participants from their circle as per quota allotment and ask them to book their to and fro journey to avoid inconvenience.

It is most urgent and important.

Secretary General
Posted by DEBABRATA MOHANTY at 04:30 No comments: 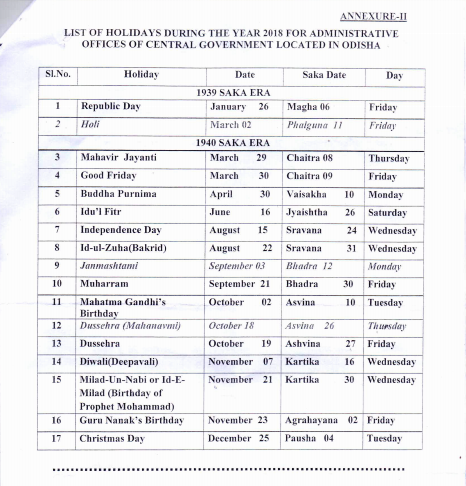 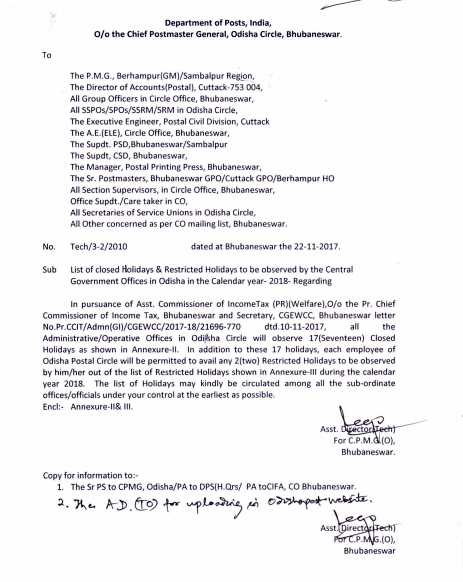 Posted by DEBABRATA MOHANTY at 23:43 No comments: 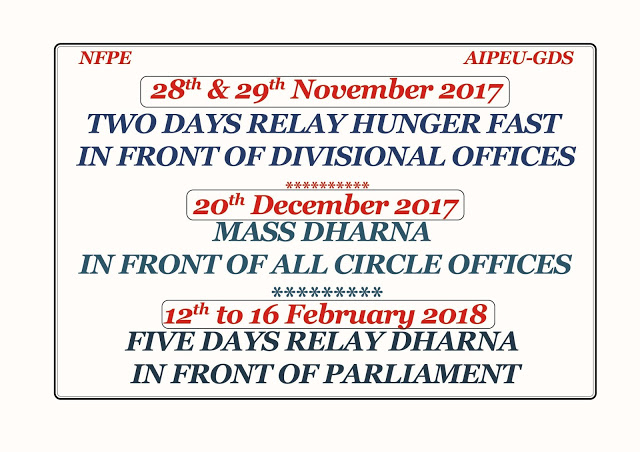 Posted by DEBABRATA MOHANTY at 07:36 No comments:

Dear Comrades,
This is to intimate that NFPE, CHQ vide its Circular referred to above (Copy reproduced below for ready reference) has instructed for conducting the following agitational programmes.

1.    Two days Relay hunger fast in front of all Divisional offices on 28th and 29th November 2017 (All Employees will wear Black Badges containing demands and will send resolution addressed to Prime – Minister.

4.    After that Indefinite Strike will be declared.

In this context, all the Circle Secretaries of NFPE Unions, Odisha Circle sat today in Bhubaneswar and took a unanimous decision for successful conductance of the above programmes.

As such, all the Divisional Secretaries are sincerely requested to conduct two days Relay hunger fast in front of all Divisional offices on 28th and 29th November 2017 and submit the proforma Resolution (produced below) to the Hon’ble Prime Minister of India.

For the purpose, all the Divisional Secretaries of each Union are requested to inform the number of participants on the above Dharna Programme to their Circle Secretary by 10th December, 2017 for making suitable sitting arrangement including provision of lunch on the day.

For the 5 Day Relay Dharna Programme in front of Parliament, 15th February, 2018 has been fixed for Odisha Circle with participation of 75 members. It is our moral responsibility to participate enmasse to make the programme successful. Therefore, it is requested that required tickets may be booked in advance at least for 4 members from each Division to avoid last minute rush.

Lastly, we would like to request you to motivate all our members to rise to the occasion and organize the first phase agitational activity of relay hunger fast in front of all Divisional Offices on 28th and 29thNovember, 2017 wearing black badges and participate enmasse in the Circle level mass dharna programme on 20th December, 2017 and march to Parliament on 15th February, 2018

Comradely yours,
Attached : As above

Dear Comrades,
The Federal Secretariat meeting of NFPE with available General Secretaries and NFPE office bearers held at NFPE office North Avenue Post Office. Building New Delhi has reviewed the whole situation arisen out of so many policy offensive and attacks unleashed by the Government of India by the way of authorizing  nationalized banks and private banks for doing business of National small savings schemes, making  the IPPB (India Post Payment Bank) as a corporate entity proposal of closure of A.P.S appointment of out sourced Postal Delivery  agents, cancellation of G.D.S membership verification Delay in implementation of  GDS Committee  Report, Amendment in Rectt. rules of P.A. non filling up of vacant posts in all cadres, non implementation of  cadre restructuring  proposals for other categories and non declaration of result of regular membership verification and so many other issues.
After a detailed and threadbare discussion the Federal Secretaries has reached to a conclusion that it is the need of hour to resist all these policy offensive and attacks by way of struggles and serious agitational  programmes culminating in to indefinite strike.
The federal secretariat has decided the following programme of action to achieve the demands as mentioned in charter of demands.
1.    Two days Relay hunger fast in front of all Divisional offices on 28th and 29th November 2017 (All Employees will wear Black Badges containing demands and will send resolution addressed to Prime – Minister.
2.    Mass Dharna in front of All C.P.M.G offices on 20th December 2017.
3.    5  Days Relay Dharna in front of Parliament from 12th to 16th February 2018. (All Circles will participates in Dharna day wise).
4.    After that Indefinite Strike will be declared.

CHARTER OF DEMANDS
1.     Implementation of positive recommendations of Kamlesh Chandra Committee Report for GDS
2.     Membership verification of GDS and declaration of result of regular membership verification.
3.     Filling up of all vacant posts in all Cadres of Deptt of Post i.e P.A.S.A, Postmen, Mail guard, mailmen, MTS,MMS Drivers and artisans, P.A CO. P.A. SBCO, Postal Actts and GDS. Drop the move of amendment in P.A. S.A., P.A.CO & P.A. SBCO Recruitment Rules.
4.     Implement CSI, and RICT only after providing all required infrastructure including band width and stop harassment , victimization in the name of new schemes, technology induction, under contributory negligence factor and trade union victimization.
5.     Stop out sourcing privatization and Corporatization.
6.     Payment of revised wages and arrears to the casual, part time, contingent and daily rated mazdoors as per  6th & 7thCPC  and settle other issues of Casual Laboures.
7.     Implement cadre restructuring for left out categories i.e. RMS, MMS, PACO, PASBCO Postmaster Cadre, Postal Actts etc and accept the modifications suggested by federation before implementation of cadre restructuring in Postal Group ‘C’.
8.     Withdraw N.P.S (contributory Pension Scheme) Guarantee 50% of last pay drawn as minimum pension.
9.     Implement 5 days week in Postal Operative offices.
10.  Stop move of diversion of business of P.O SB Schemes to Banks (Nationalized and Private)
11.  Stop move of closure of Army Postal Service.
12.  Grant OSA and OTA to RMS staff and special allowances for P.O & R.M.S Accounts.
13.  Finalization of Recruitment Rules of AAOS IN Postal Accounts with 40% S.C.F quota as approved by DOPT.
14.  Status of Audit to SBCO.
15.  Benefit of SDBS to retried GDS employees.
Yours Comradely,
(R N Parashar)
Secretary General
RESOLUTION
To
The Hon’ble Prime Minister,
Government of India,
New Delhi-110 003
Hon’ble Sir,
The Postal Employees are very much aggrieved and agitated due to the policy offensives and attacks unleashed on Postal Services and Postal Employees. The genuine demands of Postal, RMS and GDS employees are not being settled by the Postal Administration.

We on behalf of entire Postal employees request you to kindly bestow your personal attention on the problems of Postal employees  and cause suitable  action to settle those problems.
With regards.
Yours Sincerely,
Signature of all Divisional Secretaries

Posted by DEBABRATA MOHANTY at 09:08 No comments: 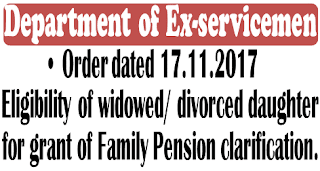 Eligibility of widowed/divorced daughter for grant of Family Pension clarification – DESW Orders dt. 17.11.2017
No.1(9)/2013-D(Pen/Policy)
Government of India
Ministry of Defence
Department of Ex-Servicemen Welfare
New Delhi -110011
Dated 17th November, 2017
To
The Chief of the Army Staff
The Chief of the Naval Staff
The Chief or the Air Staff

The undersigned is directed to state that the provision for grant of family pension to a widowed/divorced daughter beyond the age of 25 years has been made vide GoI, Ministry of personnel, P.G. & Pensions, Department of Pension & Pensioners Welfare 0M No.1/19/03-(E) dated 2S.08.2004 Circulated vide GoI MOD letter No.878/A/D(Pen/Sers)/04 dated 21.09.2004 applying the same provision to the Armed Force Personnel.
2. It was clarified vide Government of India, Ministry of Personnel, P.G- & Pensions, Department of Pension & Pensioners Welfare OM No.1/13/09-P&PW (E) dated 11.09.2013 circulated vide MOD ID No.1(9)/2013/D(Pen/Pol) dated 16.09.2015, the family pension is payable to the children as they are considered to be dependent on the Government servant/pensioner or his/her spouse. A child who is not earning equal to or more than the sum of minimum family pension and dearness relief thereon is considered to be dependent on his/her parents. Therefore, only those children who are dependent and meet other conditions of eligibility for family pension at the time of death of the Government servant or his/her spouse, whichever is later, are eligible for family pension. If two or more children are eligible for family pension at that time, family pension will be payable to each child on his/her turn provided he/she is still eligible for family pension when the turn come. Accordingly, divorced daughters who fulfil other conditions are eligible for family pension if a decree of divorce had been issued by the competent court during the life time of at least one of the parents.
3. Grievances were being received from various quarters that the divorce proceedings are a long drawn procedure which take many years before attaining finality. There are many cases in which the divorce proceedings of a daughter of Government employee/pensioner had been instituted in the competent court during the life of one or both Government employee/pensioner & spouse, but none of them was alive by the time the decree of divorce was granted by the competent authority.
4. The matter has been examined in this department and it has been decided that the clarification “grant family pension to a divorced daughter in such cases where the divorce proceedings had been filed tn a competent court during the life time of the employee/pensioner or his/her spouse but divorce took place after their death-provided the claimant fulfils all other conditions for grant of family pension. In such cases, the family pension will commence from the date of divorce” given by Government of India. Ministry of Personnel, P.G. & Pensions’, Department of Pension & Pensioners Welfare vide 0M No.1/13/09- P&PW (E) dated 19.07.2017 would also apply mutatis mutandis to divorced daughters of Armed Force personnel.
5. This issues with the concurrence of the Finance Division of this Ministry vide their ID No.10(09)/2015/Fin/Pen dated 17.10.2017.
6. Hindi version will follow.
sd/-
(Manoj Sinha)
Under Secretary to the Govt. of India
Source: http://www.desw.gov.in/
Posted by DEBABRATA MOHANTY at 06:23 No comments:

Email ThisBlogThis!Share to TwitterShare to FacebookShare to Pinterest
IMPORTANT

During the last 2 - 3 months both print and electronic media are continuously reporting that increase in 7th CPC Minimum Pay and Fitment Factor is under serious consideration of the Govt. and National Anomaly Committee will give its recommendation to Govt. and orders for increased Minimum Pay and Fitment Formula will be given effect from April 2018. We are reproducing below a letter from Govt. dated 30.10.2017 addressed to Secretary, Staff Side , National Council JCM  stating that the demand for increase in Minimum Pay and Fitment Formula will not come under the purview of National Anomaly Committee. Further Govt. has not yet constituted the HIGH LEVEL COMMITTEE for increasing Minimum Pay and Fitment Formula as assured by the Group of Ministers including Home Minister Sri Rajnath Singh, Finance Minister Shri Arun Jaitley on 30.06.2016. The so-called Senior Officers Committee has also not discussed this agenda even though staff Side has repeatedly demanded discussion and settlement as per the assurance given by Senior Cabinet Ministers. Now 17 months are over. 32 lakhs Central Govt. Employees and 33 lakhs Pensioners are being continuously betrayed by the NDA Govt.

Click here to view - DOPT Letter
Posted by DEBABRATA MOHANTY at 06:21 No comments: